The Villa de Rota is a coastal town with almost 16 kilometres of fine white sand beaches and crystalline waters, classified as one of the cleanest beaches in Europe 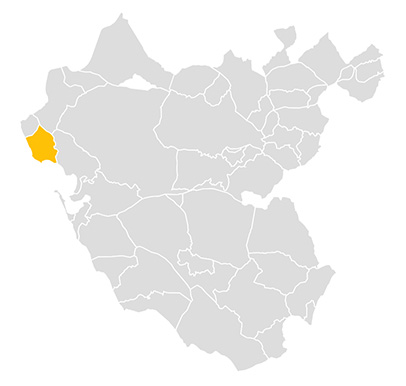 Located at the entrance to the Bay of Cádiz, Rota has provided a transit point for different cultures and civilizations throughout the centuries and has been used as a commercial port since Phoenician times. Tartessos, Romans and Moors have all settled there, and finally the conquering Christians. All have left their mark on this ancient city, which has therefore accumulated a vast historical architectural heritage.

Rota, a monumental city with a thousand year history

The Villa de Rota must be visited to capture its flavour, that of its typical dishes and its excellent wine: Tintilla de Rota

The uniqueness of its urban layout, with its ancient arches, picturesque corners and narrow streets lined with white houses, has merited the denomination of a Historic Site. A labyrinth of interconnecting streets where you can savour a cuisine closely linked both to sea and land and based on local produce, with such well-known local dishes as “urta a la roteña”. Amongst its wines perhaps the most outstanding due to its singularity is Tintilla, a sweet wine obtained from red grapes and considered a veritable oenological relic.

Rota also has a number of extensive pine forests and its historical fish pens, where an ancient fishing method has been maintained to the present day.